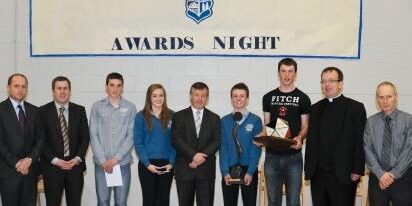 An abundance of accomplishments and achievements in academic, cultural, entrepreneurial, sporting and social disciplines were celebrated in a second annual awards night by the students, parents and staff of Coláiste Pobail Bheanntaí who were joined by guest of honour Dr Michael Murphy, president of University College Cork.

The awards night, one of the events in the school year most eagerly anticipated by the school community, culminated with the presentation of the Malli Scholarship for best Leaving Certificate results to Gerald O’Sullivan who attained the maximum six hundred and twenty five CAO points from his examinations in 2012. Noel O’Flynn was a worthy recipient of the Matt Kingston Memorial Award presented by Rowa Pharmaceuticals while Emilie Murphy’s outstanding Junior Certificate results saw her awarded the Malli Scholarship in that category.

The evening was overseen by master of ceremonies Mr Dennis O’Sullivan; deputy principal of Coláiste Pobail Bheanntraí and began in rousing style with music from The Cajun Kings, a band formed of a variety of talented student musicians and singers. Principal, Dr Kevin Healy, welcomed the students and guests for the evening and spoke in recognition of the dedication and commitment required to accomplish in academic and in extra-curricular endeavours but also urged young people to be mindful and appreciative of the support shown by their parents and families in facilitating these achievements.  Dr Healy wished continued success to UCC and explained how he looked forward to not only to extend present links with the university but to, where possible, forge new ties that would be mutually beneficial

Reverend Dr Tom Denihan, chairman of the Board of Management, encouraged the audience to reflect upon the way in which success can, at times, be interpreted in a relative and subjective way and praised the manner in which the successes of the students’ could only be seen as objective. He spoke warmly in commendation of the special guest and welcomed Dr Murphy on behalf of the co-trustees of the college.

Dr Michael Murphy’s speech was aimed firmly at the young people in the audience and showed wit, warmth and insight. He began by stating how glad he was to be ‘home’ in West Cork and explained how his native Kilmicheal had, in his youth, been referred to as part of Mid-Cork but had now been subsumed into the geographical area perceived by some to be more fashionable. His words focused on the idea that: ‘success can happen anywhere, at any time’. He encouraged his audience not to allow their ambitions be restrained by cultural, geographical or social forces. He chose a highlight the wide variety of people from Cork currently thriving at the highest levels of attainment in a myriad of fields such as politics, sciences and culture to illustrate his view that the ambitions and aspirations of young people should be encumbered in any way.

The first award category presented by Dr Murphy was the class awards where staff members nominate a boy and girl from each Junior Cycle class and a boy and girl from each Senior Cycle year group. These awards reflect the students’ application to homework and classwork, their attendance and punctuality and their positive interactions with others. This was followed by beautiful rendition of Skinny Love, performed by Emily Reynolds.

The special recognition awards for outstanding accomplishments in extra-curricular areas were presented next. These awards recognise contributions made by groups and individuals to activities within the school and while representing the school in external competitions. As well as the awards presented by Dr Murphy, Ms Margaret Horan presented the annual Bank of Ireland awards to senior and junior recipients. This section of the evening ended with a special presentation to Dr Murphy by Student Council representatives Elish Cunney and Ciarán O’ Sullivan. This was of a replica of the Kilnaruane Pillar Stone, carved from wood, made in collaboration by the students and staff of the school’s woodwork department. The presentation of the individual memorial awards and scholarships was preceded by a wonderful performance of a two hand reel by Eimear Downey and Kim Harrington and accompanied by the school’s traditional musicians.

As the evening drew to a close, Dr Kevin Healy gave the closing speech in which he thanked Dr Murphy for his contribution to what had been a hugely enjoyable evening. The many members of teaching and administrative who gave their time and effort to ensure the successful outcome of the ceremony were also acknowledged with gratitude.  The event finished with words of recognition for the students of the college: ‘I am very proud of the fact that all our students have been given every possible opportunity to be challenged to explore, to participate and to achieve success.  Participation builds confidence and allows you, as students, to fully express yourselves and develop as individuals and as team members ’ before Lauren Arundel, accompanied by Niamh Cotter on piano, sung High Hopes in a most apt conclusion to the evening.

7 students at County Hall for the AGM of the County Cork Comhairle na nÓg
December 8, 2022
Go to Top