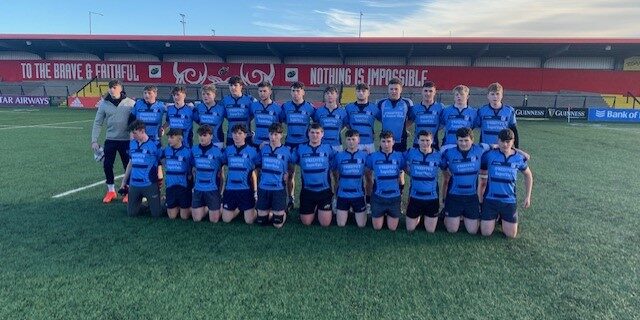 Both CPB’s Junior and Senior squads have advanced to the Munster Schools A Cups, both
of which are due to be played off after Xmas. Following the 2020 Junior teams’ first
taste of Munster Schools, top-level rugby, the sport has continued to progress and
develop at the highest level. Last season, the senior squad debuted in the Senior Cup
competition, having 2 competitive games V Castetroy College and Ard Scoil Ris in Limerick.
Another piece of school rugby history was created yesterday as both teams now have
progressed to the A cup by means of winning their respective qualifier rounds.
Last week the junior team defeated Villers College Limerick in the final of the Junior Cup
qualifier on a score line of 17-7 played at Irish Independent Park. The game itself was a
close contest with Villers getting the better start and the lead in the match. Like the
previous league game, CPB showed great determination and heart to work their way back
into the game. The decisive moments came when Daniel Ward and Killian Hurley crossed
the whitewash in the second half to take the lead. Confidence was up and the team played
some excellent rugby in the closing stages to progress to the Junior Cup Proper in January.
Our opposition will be none less than Glenstall Abbey who will prove to be formidable
opposition
CPB Senior squad for the 2nd year in a row have made the Senior Cup. After a
comprehensive victory over Villers College Limerick in the semi final on a score line of 46-
17 they faced Clonmel High School in the freezing conditions in Musgrave Park. CPB got
off to the better start scoring a converted try by Joey O’Sullivan. Conversion by Dylan
Hicks. Clonmel responded well and capitalized on a couple of unforced errors by CPB and
went into a 12 –7 lead approaching half time. Just at the whistle Stephen O Donovan
scored a try to bring it all level. CPB made the perfect start to the second half, scoring
again inside the opening minute when Oran Wiseman made a charge for the line. Alan
Kelleher’s impact on the game was improving with each minute that passed and rewarded
with his first try of his CPB Rugby career. CPBs dominant display in the opening 15 mins of
the second half continued to put the game truly out of reach with 2 more tries from Fionn
Barry and Stephen O’Donoghue. Dylan Hicks converted 4 of the 6 on the day. The
scoreboard read 38-17 in the winter sunshine to close out a great display of rugby talent
from CPB.
As with the Junior Squad Glenstall Abbey awaits in the first round of the Senior Cup
proper. Roll on Jan 11th. 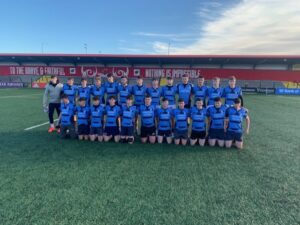