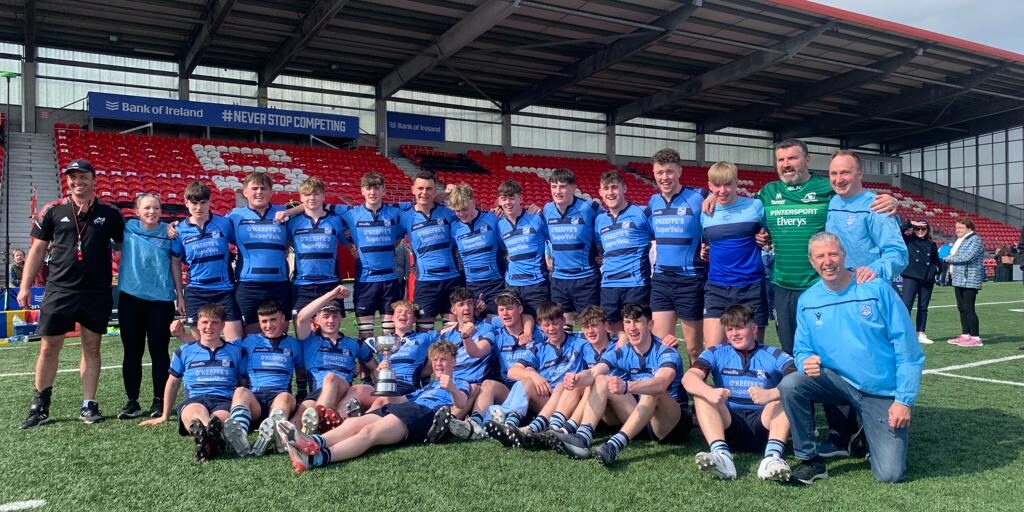 CPB V Villers College Limerick
Munster Schools Cup Final
Match report
Venue: Musgrave Park Cork
Date: 29-3-2022.
On Tuesday CPB completed an extraordinarily successful season of
Schools Rugby with a comprehensive victory over Villers College
Limerick. The competition dates to 1974 and while CBP had only once
previously won the prestigious competition in 2017, this season’s final
was eagerly anticipated as both schools have had recent rivalry across
all competitions.
The match was played in the sun-soaked Musgrave Park in ideal
conditions for free-flowing rugby. CPB got to grips with the pace of the
game in the early exchanges with their efforts rewarded with an early
try out in the corner off a lineout maul. This was the first of two by
hooker Darragh McSweeney on a day he will remember. Some excellent
tackling across the defensive line by Michael O Donovan and the hardworking Cameron Murnane ensured that the CPB whitewash was not
breached. Villers attack was hampered by a yellow card for foul play
midway through the first half which allowed CPB enforce their running
game and keep the Villers team under pressure. A penalty was the
reward on the 10m line which Dylan Hicks slotted over to perfection. The
half time score ended at 8-0.
The second half began with the same intensity as the first. Some
excellent CPB attacking moves began to find space and complete a
couple of quality line breaks. The large CPB student support began to
find their voice and the team responded accordingly by raising the
tempo. A try by captain Fionn Barry from an excellent offload by Tadgh
Cronin was converted by Dylan Hicks. Indiscipline by Villers cost them
further as Hicks slotted his second penalty this time closer to the posts.
The score now stood at 18-0.
Villers responded well and got a foothold in the match by scoring a
converted try of their own. Their period of control was however short-
lived as the CPB pack upped the pace of the game which Villers struggled
to deal with, within a few short minutes this pressure was rewarded
with Hick’s 3rd penalty of the day which stretched the lead out to 21-7.
CPBs back line now was getting clean fast ball and they began a series of
multi-phased attacks, hitting the line a pace and playing into the spaces
Villers defence was beginning to tire. CPB set piece and in particular the
lineout work by Jack O Donoghue and Liam Harrington ensured they
dominated possession and gained entry to the Villers half. Tadgh Cronin
who was playing at no 8, marauding runs were rewarded with a try of
his own midway through the second half.
From that period forward CPB took full control with the Villers team
clearly running out of steam. Darragh McSweeney crossed the line for his
second try and from there on there was no way back given that time
was running out. CPB never let up and finished out a well-rounded
performance. It was clear that their excellent form for the season held
true. The experience that they gained in qualifying for the senior cup all
contributed to a very satisfactory year of rugby for this squad of players.
Final score was 33-7 and the Mungret Cup is back in Colaiste Pobail Bheanntraí. 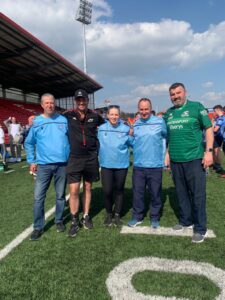 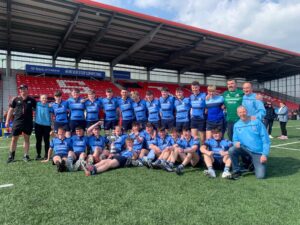 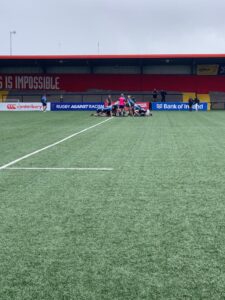