1st Years and Under15 boys’s bow of All-Ireland out at last 16 stage. 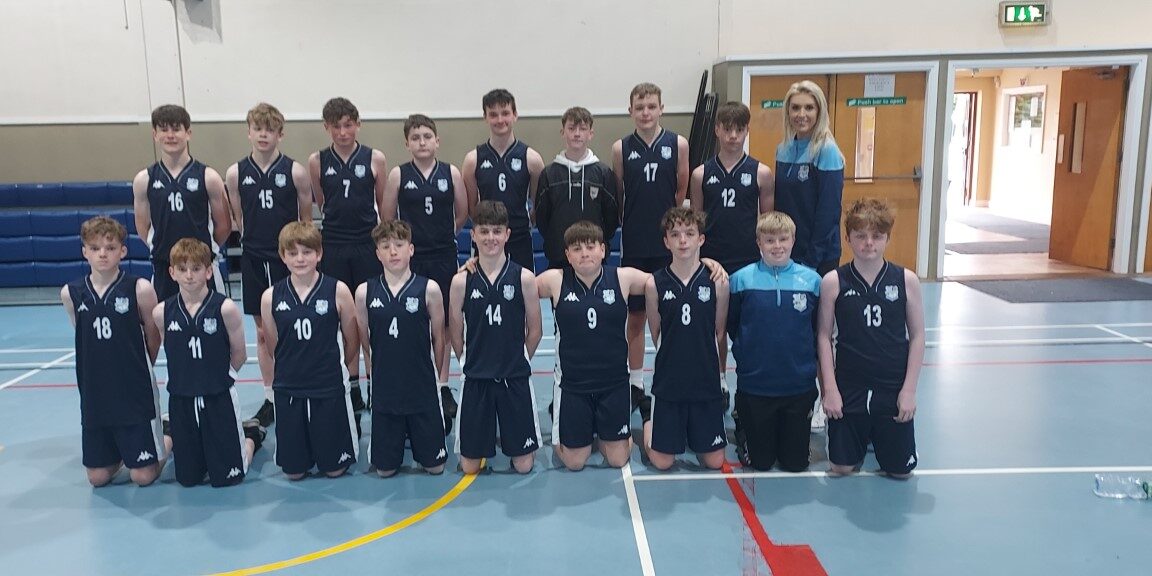 Our First Year Boys and Under 15 Boys School Basketball Season came to and end yesterday as both teams bowed out of All-Ireland competition at the last 16 stage. However, after 19 months of no basketball up to November 2022 the two squads can be delighted with the progress they have made this year.

The First Year team travelled to Castleisland yesterday to play Castleisland Community College and like all good Kerry basketball teams, Castleisland were extremely strong on rebounds and had great shooters. The first quarter ended level and up to half time the standout players of James Murphy, Killian Hurley, Adam Gilman Burke kept our boys within a basket by the half-time buzzer. Shay O’ Donovan, Darragh Dullea and Oisín Murphy were excellent in the second half. Fionn Goggin and Colin McCarthy endeavoured to keep CPB in the game in the third quarter and were rewarded by their efforts with free throws in which both converted. Charlie Swayne caused problems for the physical Kerry team on rebounds. However, in the final quarter the Kerry team pulled away and won in the end by eight points.

After a great first season of Post Primary Basketball the squad can be very proud of their accomplishments. Some, who never played basketball before this year have found themselves playing and competing in a new sport that will give them enjoyment for many years to come. Well done boys!

Our under 15’s who went to support the first years yesterday in Castlesisland, travelled on another hour up the road to Newcastlewest Community Hall to play Salesians of Pallaskenry. Boasting a squad of Limerick Celtics players this was always going to be a very competitive game against the Limerick champions. However, Colaiste Pobail won quarter 1 and took a one point lead into the second quarter. Jack Phillips scored well and the defense of Paddy Russell kept the Salesians scoring to the minimum. Oscar Doody and Owen Crowley batlled really well on the boards and first year Killian Hurley, who had already played in the first year game was busy in the offense.

In the second quarter the Limerick school had a huge height advantage with the two new fives. This allowed them to take advantage at the post where they got into and increased their lead. However a three pointer from James Keane and some layups from Cathal Mccarthy kept our boys in the game along with some good defensive play from Jack Gibbons and good rebounding from another first year James Murphy. Charlie Curran also opened his account in this quarter.

The third quarter started badly for CPB and they found themselves facing a 21 point deficit two minutes in. A time out was called and tactic were changed to a full court press. The remainder of quarter three was the best basketball that this team played all year. Paddy Russel and Oscar Doody started scoring from the paint, Jack Phillips and Charlie Curran who between the pair of them scored 45 points on the day were making fantastic drives at the basket. The lead was cut to 6 going into the final quarter. In quarter four it was up and down, score for score and our boys never broke that six point lead even with some fantastic scores from all 5 on the court. The third quarter effort seemed to drain the energy that was needed to catch the leaders and in the end Salesians ran out deserving winners in a thoroughly competitive and enjoyable game. The CPB under 15’s can be extremely proud of how they dusted themselves off after Thursdays Regional Final disappointment and can look forward to next season where they will play at under 16 level in the South Region League and the National under 16 Schools Cup.