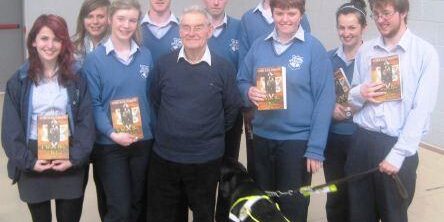 On May 2nd last, one of the last Holocaust survivors in Ireland, Mr Tomi Reichental visited CPB where he spoke to senior cycle students of his experiences as a child prisoner in the Nazi concentration camp of Bergen-Belsen during World War 2. Mr Reichental has spoken to students all around Ireland about his imprisonment as a nine year old and witnessing his grandmother and many others die in the concentration camp. Many of the students and staff who were present were very moved by his story, in particular the initial stage of his capture by the Nazis and transportation to the prison. He has written a book about his time in Bergen-Belsen – “I was a boy in Belsen”, copies of which he dedicated to students of the school after the talk. Afterwards, he agreed to be interviewed by two 5th year history students, Tim Cronin & Ciara Thornton, who had prepared questions in advance. Along with the talk itself, this interview was recorded by the students. Copies of his book have been given to the school library.