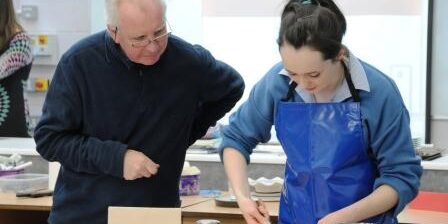 The sense co-operation and endeavour nurtured through Bantry’s hosting of the Atlantic Challenge this summer served as an inspiration to one of the community’s prominent restaurateurs.

Christian Barcoe, of Willie Pa’s and Tractors restaurants, was so struck by the warmth in which young people from all over the globe were accommodated that he resolved to inaugurate a challenge of his own for young people and, as Coláiste Pobail Bheanntraí was the venue that hosted the participants this summer, he deemed it the most suitable setting for his cookery competition.

A Masterchef challenge was devised for both Junior cycle and Senior cycle students. Participants had to invent a recipe that would incorporate and celebrate the finest local produce West Cork has to offer. A hugely generous prize fund was put in place and students were quick to invent dishes, hone their cooking skills and to create written and visual descriptions of their proposed entries. After an almost overwhelming number of entries, eight finalists’ dessert recipes were selected from the Junior cycle and eight finalists’ main course recipes were selected from the Senior cycle.

These students competed in a cook off, judged by John McKenna of the Bridgestone Guide and Denis Mourel, chief at Wille Pa’s restaurant which was held on the 7th of December in the state of the art Home Economics rooms in Coláiste Pobail Bheanntraí. The finalists in each category were competing for a first prize of €350 and having the honour of seeing their dish added, for a month, to the menu of Willie Pa’s restaurant. There were runners up prizes of €200 and €100 for second and third places respectively while each finalist would receive a €20 voucher for the restaurants.

As well as the pressure of working under the watchful gaze of the adjudicators, the finalists had only an hour and a half to put forward their completed culinary creations. Once that time limit had elapsed and a mouth-watering array of delectables had been sampled, the judges completed their evaluations.

Before the winners were announced Dr Kevin Healy congratulated the finalists for their achievements.

Nerves were jangling as the winning dishes were announced as follows:

This competition has, from the moment of its inception through to its’ thrilling conclusion, encapsulatedmuch of that which is praiseworthy in our locality. The Masterchef process has clearly shown the honest endeavour, commitment and enthusiasm of our young people; a spirit of pride in our community and an appreciation that West Cork’s local produce is more than equal to the highest gastronomic standards.